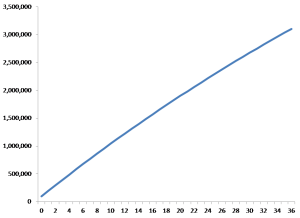 In real life this will be even worse: Company A will most likely start spending more on sales and marketing to artificially hold on to the growth rate, while company B will be able to sustain growth as is.

There are two kinds of revenue churn rates every startup should measure: Gross Churn and Net Churn.

Gross Churn is the percentage of your customer CMRR that has been lost over the measured time period. If you started the year with $500k of CMRR for your same 500 customers, and the 40 customers that churned represented $30k of CMRR at the start of the year, then your Gross CMRR Churn Rate is 6% annually ($30k of starting CMRR churned/$500k of starting CMRR).

Net Churn also takes into account revenue expansion from existing customers (up-sells, cross-sells, higher usage, etc.) In the previous example you started the year with $500k of CMRR from 500 customers and 40 customers churned which represented $30K of churned CMRR. Now let’s assume that the 460 customers you retained grew CMRR by $80K by end of year then your net CMRR from the existing customers is $550K ($500K base + $80K expansion – $30K churn). Therefore, your Net CMRR Churn rate is -10% annually. Or, in other words, you have a 10% net negative churn rate.

I am a Partner at Bessemer Venture Partners and a proud father of three girls. View all posts by Amit Karp

I am a partner at Bessemer Venture Partners' Israeli office and a proud father of three girls.

The thoughts and opinions expressed herein belong to the author and do not necessarily reflect those of Bessemer Venture Partners or any of its affiliates (“Bessemer”). The material here is written on the author’s own time for his own reasons and Bessemer has not reviewed or approved the information herein. Any discussion of topics related to Bessemer or its investment activities should not be construed as an official comment of Bessemer
%d bloggers like this: